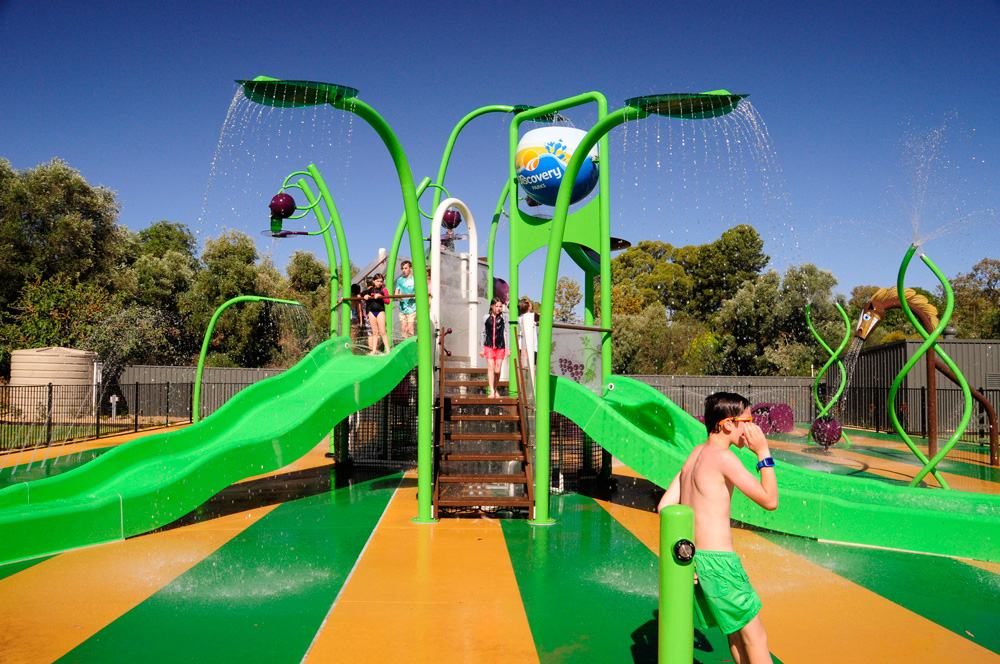 “We’re very excited—not only about the water park, but what it’s going to do for us across the valley.”

Discovery Parks General Manager, Damien Gallacher says the goal was to offer an attraction that would increase visitor demand, supporting their plans for future expansion and additional guest cabins. Inspired by spray park successes at other Discovery park destinations, Gallacher’s team chose a zero-depth splash pad and activity tower design that would pay tribute to the region's agricultural heritage.

“Barrosa’s design was challenging for us initially as it’s an inland park, located in a rural farming district,” Gallacher says. Working with the ParkEquip team they were able to achieve a play design inspired by the surrounding landscape. “The green and burgundy colour palette represents the grape vines,” Gallacher says. The activity tower comes to life with giant showering leaves and round grape buckets that fill with water before spilling onto waterplayers below. At 500 square metres, the splash pad offers something for all ages with unique play zones. Toddlers can play safely among gentle spray features, while thrill-seeking waterplayers (parents included) can get drenched under the mega soaker’s 40 gallon splash.

“Without a shadow of a doubt, ParkEquip is exceptional to work with—not only for the delivery of the product but of the experience as well. Their team provided on the ground support and the construction was seamless,” Gallacher says. Discovery Parks filmed the entire installation and assembly process, presented in their time-lapse video below.

The water park officially opened to guests on December 18th 2016. By January, the park's bookings had doubled from the previous year, Gallacher says. “We’re very excited—not only about the water park, but what it’s going to do for us across the valley.”