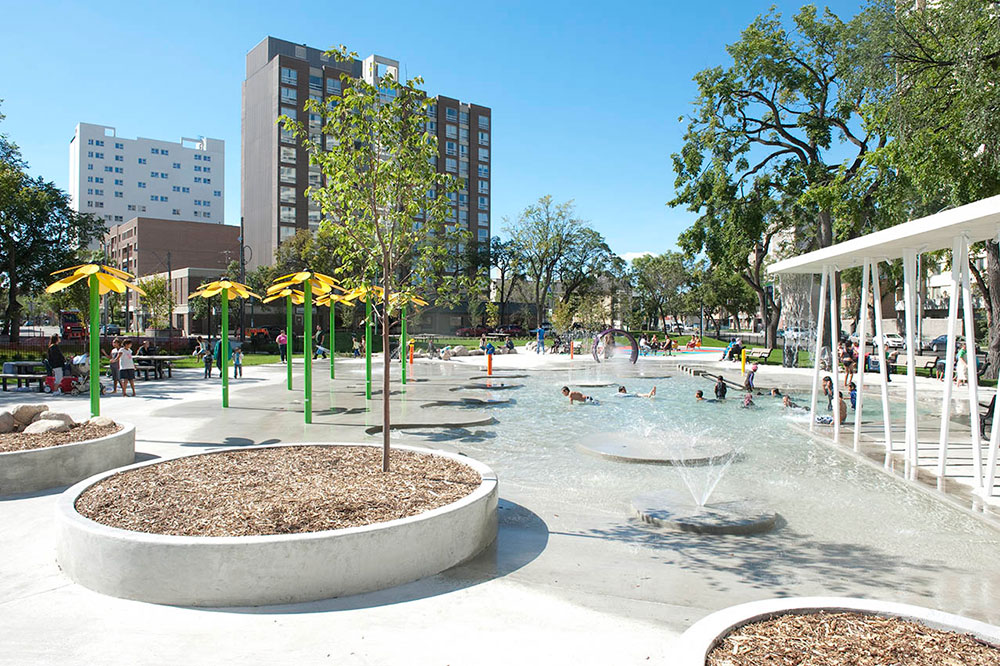 In the heart of downtown Winnipeg’s immigrant community was a park that was virtually forgotten. Central Park had gone from being a prominent, historical landmark to a neglected, high-risk area. After undergoing a revitalization, Central Park’s image has been transformed into a safe and fun place for children and families to enjoy for years to come. At the end of four years and five million dollars raised by the community, the Central Park project was completed, with one of the shining new attractions being the wading pool and aquatic play pad that covers roughly 8,600 sq. ft.

With the city’s desire for an aesthetically-pleasing spray park that could be operated independently from the oasis-style wading pool, the Central Park aquatic facility came with its own unique set of challenges. Two separate water treatment systems were installed, making it possible to have the wading pool draw from re-circulated water while the spray park could operate as an independent drain-away, satisfying any health concerns by avoiding cross-contamination. Additional considerations that surpassed local requirements included a UV system, pressure relief valves to control flow and a custom wall mounted manifold.

Another challenge unique to this project is now considered one of the most beautiful features: the glass structure that houses the washrooms, lockers and mechanical room. The building was conceived to be literally “transparent” to lower the incidence of crime while still fitting in with the overall aesthetics of the aquatic area. The spatial considerations of the building were somewhat restrictive and resulted in a custom-built manifold and water treatment system. Inside, the washrooms were built with environmentally-sensitive low-flow toilets and motion detecting sinks.

Complimentary to the wading pool are aquatic play features like concrete islands with ground sprays and 10 feet tall Daisy Mae columns placed in repetition to add to the oasis-like feel. The aquatic play pad located at the end of the wading pool is equipped with activators and water cannons to allow for an interactive and engaging family playground. In addition to the aquatic space, the park includes a water table with troughs for water-manipulated play, a unique dry playground and an embedded artificial turf soccer field built 3 feet deep into the earth to keep the ball in play.

Since Central Park’s new aquatic facility opened it has become the pride of the multi-ethnic community that surrounds it. Crime rates have also plummeted, and the goal of revitalizing this historic hub has been achieved.